In the footsteps of the Apostle Paul

The Apostle Paul, one of the most important figures of early Christianity, visited the city of Corinth three times and his letters “to the Corinthians” are excellent examples of Christian discourse.

The Great Apostle of the Christian faith did not belong to the choirs of the Twelve Apostles, as he never met Jesus during his earthly course, and was in fact a fierce opponent of the sermons of the Nazarene. Paul embraced Christianity through vision when he became one of the leaders of the new doctrine, relentlessly transferring his ecumenical character to Asia Minor, Greece and the West. That is why the “Apostle of the Nations” is known.

Corinth is one of the “Steps of the Apostle Paul”, ie the places he visited, teaching the work of Jesus and preaching the gospel.

The Apostle Paul comes to Corinth, after his famous speech at the altar of the “unknown God” in Athens. He will remain for a year and a half (until 52 AD) creating an important Church with special relations, as confirmed by his repeated travels to Corinth and the correspondence (A and B Letters to the Corinthians).

He will meet a couple who will play an important role in his stay in Corinth but also in his later missionary work, Akilas and Priscilla. Compatriots and fellow artists, stage directors by profession came to Corinth from Rome after the decision of the emperor Claudius to expel the Jewish community from Rome. The couple, who according to all indications were Christians before they even came to Corinth, became particularly associated with the Apostle Paul and worked together as directors. 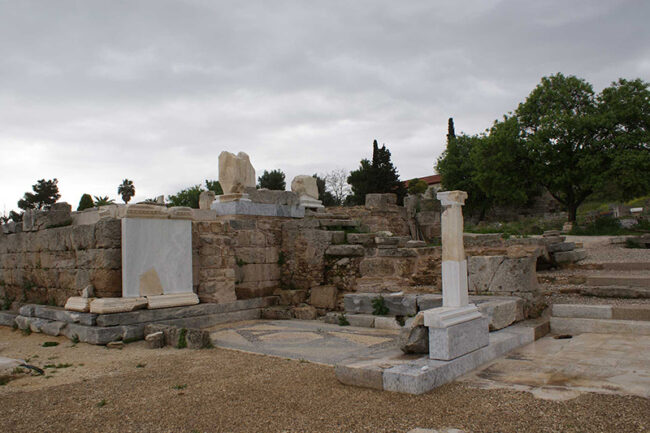 The Step of the Apostle Paul (photo: corinth-museum.gr)

Among those who believed was one named Erastus, who, along with Titus Justus, says, “Gaius, my stranger, and the whole church, embraces you, Erastus, the steward of the city” (Romans 16:23). On April 15, 1929, a stone was discovered on the road with the inscription “ERASTVSPROAEDILITATES [UA] P [ECUNIA] STRAVIT” which refers to the donation of the road by a city housekeeper from Erastus. Thus the Lover of Corinth mentioned by the Apostle Paul is identified with the Erastvs of the inscription. In Corinth most of the faithful were ethnic and some were from high social classes such as Erastus.

The Jews, however, do not rest when they see the Apostle Paul preach and they definitely want to create a problem for him, which they will try to do in the same way that the Jews created a problem in Thessaloniki and later in Veria. In July of 51 AD. (and less likely 12 months later) LuciusJuniusGallio (French) came to Corinth as viceroy of Achaia. Shortly after Gallion arrived in Corinth, the Jews brought the Apostle Paul before him to judge him on the charge that the Apostle Paul brought beliefs that were foreign or possibly illegal to the Roman Empire. The Frenchman refused to try the Apostle Paul, claiming that the matter did not concern him as it was an internal dispute between the Jews. The traditional part, which is also supported by archaeologists, to which the Apostle Paul was led in front of Gallion is the Step located in the Agora of Corinth. The Step was used by government officials for their public appearances in front of the world.

Apart from the church in Corinth, the Apostle Paul will also establish a church in Kechres, an important member of which was the deacon Phoebe. After a year and a half in Corinth, the Apostle Paul will leave with Priscilla and Aquila for Ephesus. He will leave behind a large church, a church that due to its cultural surroundings will prove to be a difficult church with many problems. The Apostle Paul will write at least 3-4 letters trying to solve these problems. After about six years he will reconsider Corinth, during his third missionary tour, and will stay at the house of Gaius from where he will write the letter to the Romans.

Before the end of the 1st century, Clement of Rome would send a letter to the church of Corinth trying to solve some problems that plagued the church. Despite the problems, the church, as the letter shows, was generally in great prosperity.