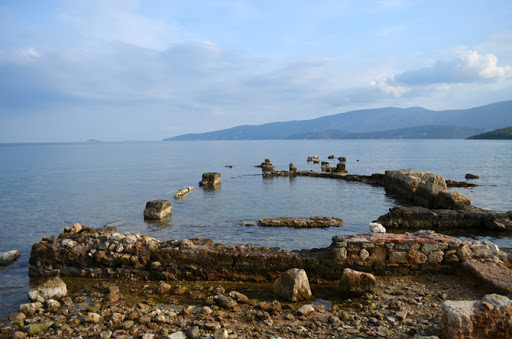 It was the 2nd port – port of Ancient Corinth, where innovative methods of construction of port facilities were also applied. And in that there were two divisions, the commercial and the military. It is named after Keghrias, a twin brother of Lehi, son of Pyrenees and Poseidon.

This port was partly natural, as it had north and south capes, and partly artificial, since the extension of the capes was made of two breakwaters – moths like a horseshoe, about 30m high from the bottom of the sea, which created a large jetty, leaving one entrance width 120m. The largest width of the port was 280m and the longest distance from the main pier to the breakwaters of the entrance 210-215m. On the NE side, a 17m wide and 106m long pier was constructed and opposite another pier of approximately the same width and 170m long.

At the same time, the land subsided and the sea rose in the area, with the result that the Roman buildings were at sea level and the archaic and classical ones below it.

Extensive archeological excavations have been carried out in the port and have revealed a wealth of information and many finds, with a rarer series of glass deposits (a forerunner of today’s stained glass windows) kept in the Isthmia Museum. In the port, in addition to the very extensive warehouses, shops and public buildings, which had the greatest development during the Roman era, a temple of Aphrodite, Isis, as well as early Christian temples were discovered.

From this port the Apostle Paul traveled to Rome during the great expeditions for the spread of Christianity.