Route through time in the area of ​​Ancient Tenea and Kiliomodi

Legend has it that the Teneates were descendants of the captives of Troy, whom Agamemnon, through Tenedos, settled in the area.

Over time, the myth of the lost city covered the area with a veil of mystery and many travelers and contemporaries searched for Ancient Tenea . The only find from the land of Teneatida was the “Kouros of Tenea”, a work of the 6th c. BC, which was found in 1846 in Athikia, Corinth. It represents a young man with a naked, athletic body and has the primordial form of the god Apollo.

The discovery of an archaic sarcophagus in 1984 during the work of the Community of Chiliomodi and the finding, in the area between Chiliomodi-Klenia in 2010, of the Twin Kouros, impressive tomb statues of the Archaic period, products of antiquity, was the reason for the systematic archaeologist Dr. Elena Korka , Honorary General Director of Antiquities & amp; Of Cultural Heritage of the Ministry of Culture.

The excavation takes place in September and October each year since 2013 and continues to this day. With the participation of a multidisciplinary interdisciplinary team, archaeologists and students from Greek and foreign Universities, the Tenea Project team supports with hard work this important excavation effort to find and highlight Ancient Tenea. During the seven years of the excavation activity, an organized cemetery was located (6th century BC – 3rd century BC), section of an ancient road, a two-room above-ground burial monument of the 1st c. A.D. The first residential Roman remains of the city of Ancient Tenea were found at the Old School site, while in 2019 the first public building, the Baths, came to light. The discovery of Ancient Tenea was considered one of the most important archaeological achievements in 2018 and attracted the interest of the whole world. Very important findings have been found in the seven-year excavation, which are studied by scientists and reveal a rich society, with the character of interculturalism, which is in an important position that made it a passage in all Hellenistic and Roman times. They also show that the area has been continuously inhabited for 1000 years at least since the 6th c. e.g. until the 6th c. A.D. and, as it seems, is abandoned by the invasions of the Avaroslavs.

The remaining people now move to the mountainous area and in the following centuries the solitary life flourishes and the monasteries play not only a religious role, but also a political and economic role, especially during the Venetian and Turkish rule. In the place where Ancient Tenea was located, which coincides in part with today’s Kiliomodi, there was no habitation due to its dangerous location, because it is located at the Corinth-Argos crossing.

In the area, however, there is a great and very rich monastery, the Holy Monastery of Faneromeni (Old Monastery), located seven kilometers southeast of the current village and its presence was intertwined with the life of the inhabitants of the area and there was a strong spiritual connection. The rich plain of the area was the property of the monastery and before the revolution some families lived there renting or taking care of the land of the monastery.

The Catholic of the Old Monastery of Faneromeni of the 12th c. A.D. and the church of Agia Marina of the 16th c. AD, which has been hagiographed by the painter of the time Dimitrios Kakava, since 1951 historical monuments have been defined. The monastery was male until 1949 when it was converted into a convent, while in 1897 it was moved to its current location, three kilometers east of the village, next to the forest.

With the establishment of the Greek state, there was a great movement of the inhabitants from Chiliomodi and in 1843 311 inhabitants were registered. The rural-livestock settlement is slowly changing into a place with a petty bourgeois character, in part, as the new societies of the free Greek state were now being formed, when their position was relevant.

And the position of Kiliomodi was very topical. It is located just 18 km from Corinth, 98 km from Athens, 33 km from Argos and 43 km from Nafplio. Great archeological sites are very close, the archeological site of Ancient Corinth at 13 km, Ancient Nemea at 17 km and Mycenae at 23 km. It is located at the Corinth-Argos pass, in a nice location, with olive groves & amp; plain all around and next to a beautiful forest. Its location enabled it to develop, acquire a railway station and have easy movement with a good road network.

It is a village of the Municipality of Corinth, 18 km south of Corinth and on the Corinth-Argos road. It has about 2000 inhabitants, most of whom are engaged in agriculture, viticulture, poultry farming, animal husbandry and trade. The word Kiliomodi is complex and comes from a thousand and fashions. Modi was usually a unit of measurement of grains, it was also used as a unit of surface, and indicates a concept of clearly large and indefinite extent.

The village has an Agricultural Clinic with two permanent doctors, KEP, Post Office-Savings Bank, Kindergarten, six-grade Primary School, High School & amp; High School.
To the east there is the famous pine forest of Chiliomodi, whose wonderful forest environment and its healthy climate, has made it known outside the prefecture. A large part of the forest was destroyed in the fires of 2007, and then tree plantings were organized with the participation of many associations and environmental organizations. In recent years the place has become green again and the young trees are growing taller!

The people of the village are hardworking and take care of the progress of the village, while in recent years many associations are active, which have a strong presence and offer important work to society. So the locals have fun with the events of the place, take part in theatrical performances, sing in the Choir, watch the excavation, run on paths in the forest and ancient streets, get passionate with the village group Atromitos, get strength from the monastery , they love its forest and if necessary they extinguish the first fires that threaten it.

It is very interesting to visit this place, to get to know its people first, but also to get to know the places that make it adorable. Our great actress Irini Pappas, the director Manousos Manousakis , the poet Vassilis Rotas come from Chiliomodi.

The visit to the Old Monastery of Faneromeni, in a place like an eagle’s nest, with very easy access to the seven kilometers from the village is wonderful. Every Easter Friday, the popular road Kiliomodi-Paleo Monastery takes place and is held, while on the eve (Easter Thursday) the lighting of the fires on the adjacent ridge and the feast that follows with the roasts and wine are reminiscent of genuine feasts of bygone eras.

The visit to the New Monastery of Faneromeni, and to the adjacent church of Agia Marina, three kilometers from the village, is a special experience of a religious meeting with nuns who are very hospitable and special. The monastery celebrates on the 23rd of August and on the 21st of August there is a procession of the icon and a journey from an old monastery to a new monastery with the participation of many people.

The route, the run and the walk in the forest of Kiliomodi, just 3 km east of the village, is wonderful and refreshing and, if we pass near the camp in the summer, we will hear the laughter & amp; children’s music.

Participating in the uneven road races in the pine forest and mountain running in the ancient roads of our place will be an unforgettable experience. On February 24, 2019, the irregular road race “TRIAL Half Marathon of Faneromeni Kiliomodi” was organized with great success on a wonderful winter route of 6 km and 21 km in the forest and ended the camp where a boiled goat was waiting for them.

This year, the 2nd “TRIAL Faneromeni Kiliomodi Half Marathon” is scheduled for February 23, 2020. In 2019, the 3rd Mycenae-Tenea Mountain Running Race was also organized, starting at the Mycenaean Lions Gate and ending at the Stadium of Xi and in the footsteps of our glorious history.

The visit to the statue of Nikitaras, work of Fanis Sakelariou, to honor the hero for his Battle of Dervenakia and Agionori, just 1000 meters from the village is a tribute to a humble hero of the Revolution of 1821 to whom we owe our Freedom.

Our acquaintance wintroduction to the archaeological research tenea-project will bring us in contact with our distant past but which continues to influence and inspire us. There is no organized archeological site yet.

Our visit to the old fountain of the village, on the edge of the village will remind us of fairy tales and stories of the ancients.

Watching an enjoyable performance from the Kiliomodi Theater Stage, watching the “Polymnia” choir or a dance performance by the local Dance Club will satisfy us completely.

With our walk in the village to see the house of Irini Pappas and Manousos Manousakis, the railway station, the village church, Agios Georgios which on the day of its celebration becomes a popular street with the participation of many villagers, the beautiful schools and the stadium of Kiliomodi, a living space of the village, we will get to know Kiliomodi better.

Participating in the Clean Monday Carnival, reminiscent of the carnivals of earlier times, is a highly relaxing and genuine experience away from foreign habits.

The big festival of Kiliomodi, which takes place on the 22nd and 23rd of August, attracts many visitors and the music and entertainment stops in the morning.

And… if we want to eat or drink our coffee, very easily… with spit delicacies, local delicacies and fine wines of the region. The taverns in Kamareta, in Gemenis, in Chiliomodi or in the surrounding villages, and the souvlaki restaurants in Chiliomodi prepare wonderful delicacies and will satisfy us completely. The cafes, the cafes, in Kiliomodi, living spaces with a warm environment will definitely compensate the visitor.

If, nevertheless, it is very difficult to visit it and see it up close soon… let’s listen at the moment, to the music from the well-known youth band 1000mods, which has started from here and gives concerts all over the world. Then our mental journey will start from Kiliomodi and will reach every corner of this world! 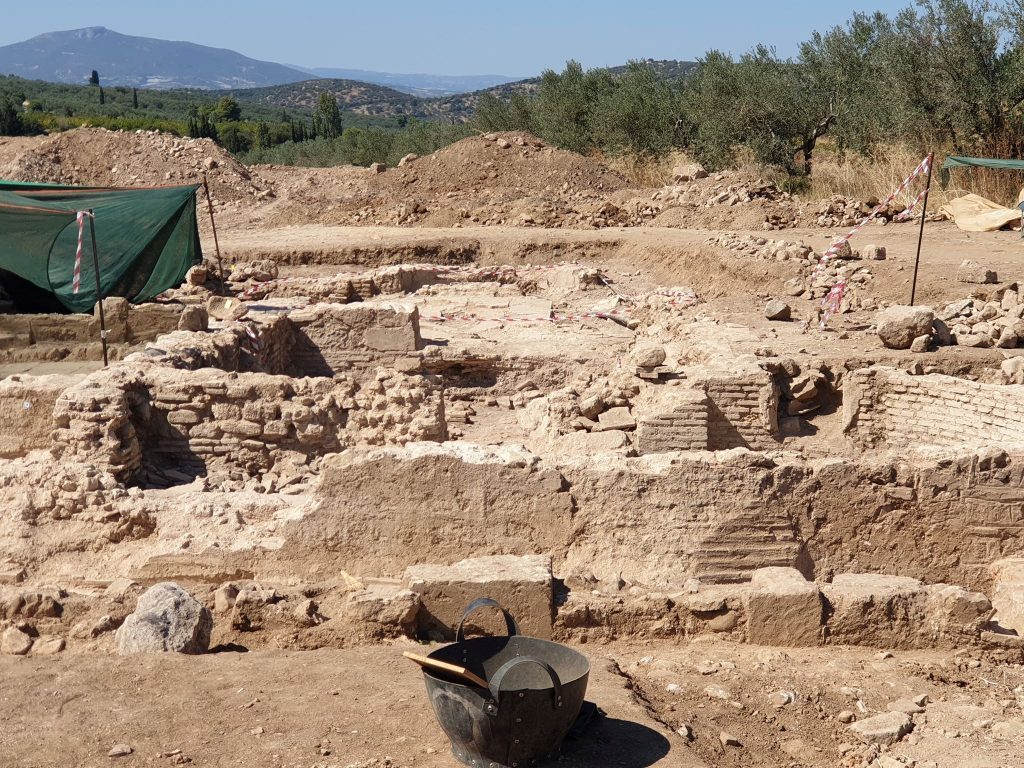